How to Create Your Personal Theme 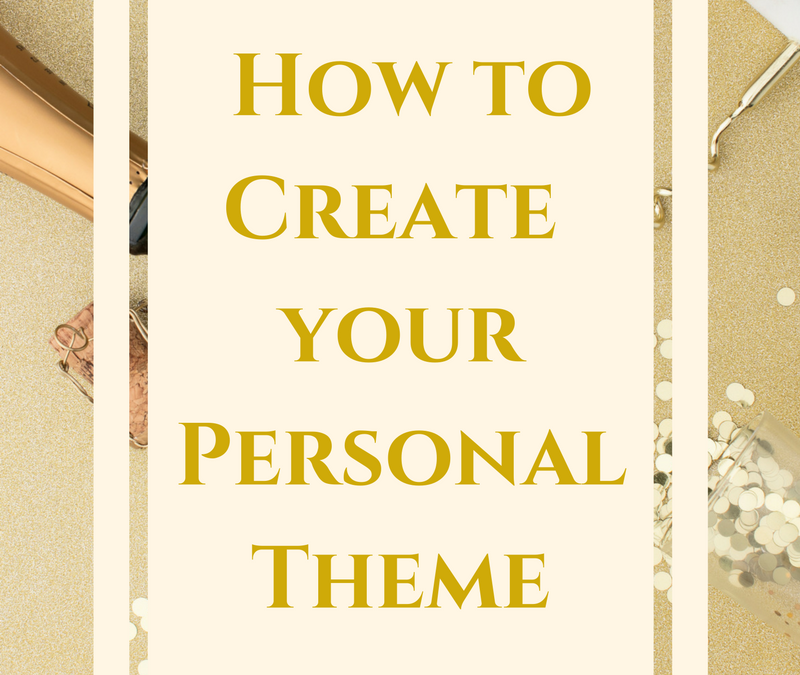 As 2016 drew to a close, I noticed a trend away from traditional New Year’s resolutions, and a movement towards choosing a personal theme for 2017.Gone were the stale promises of losing weight, saving money, or reading 50 books. Instead, I observed people choosing a word or phrase to define their 2017. Although there was some variation on the words themselves, the common thread linking most of them was the sense of possibility and openness that stems from a new beginning.

Gone were the stale promises of losing weight, saving money, or reading 50 books. Instead, I observed people choosing a word or phrase to define their 2017. Although there was some variation on the words themselves, the common thread linking most of them was the sense of possibility and openness that stems from a new beginning.

Like with so many others, the idea of a personal theme for 2017 resonated with me, particularly following the chaos and turmoil that pervaded 2016. Choosing a theme felt like a great way to clear the space and start anew. So, okay, let’s do this! Let’s create a personal theme!

For a few days, I let the concept percolate a bit. I meditated on it, read authors whose work I find meaningful, took note of inspirational sayings, and generally tried to stay open to whatever I was meant to hear. I was fairly confident that if I stayed receptive, inspiration would strike with THE PERFECT THEME for 2017.

That approach totally didn’t work for me. Perhaps I was trying too hard, or ascribing too much meaning to the process, but I sensed that the tighter I held on to this concept of the perfect personal theme shooting into my mind via divine inspiration, the more difficulty I had discovering it.

For those of you unfamiliar with Fizzle, their mission is to help indie entrepreneurs create and sustain their business without sacrificing their quality of life. They have a robust membership program that includes dozens of courses, an active forum, coaching calls, and all sorts of wonderful support. But in addition to their paid offerings, they also offer a free weekly podcast that is full of practical guidance about small business and entrepreneurship.

At first glance, I wasn’t expecting an episode entitled “Goal Setting Sucks!” to be my gateway to inspiration. But as I listened to Steph Crowder detail her annual life review in five easy steps, a little voice inside me said, “Do this, Lee. Do this.”

I’m not sure about you, but when my little voice says something to me, it always behooves me to listen to her. And I won’t lie – sometimes I don’t. Sometimes I forget what she says and my idea loses steam, and other times I do the exact opposite and inevitably pay the price. But this time, when she spoke, I paid attention and followed through.

I suggest you listen to the podcast and download the accompanying toolkit to get the most out of Steph’s program. But the TL;DR version of her plan is:

I carved out a few hours one morning to walk through the steps, uncertain of the outcome but willing to try.

It was a game changer. Completing the steps helped me realize why I had been struggling to find a theme: I wasn’t rooting it in concrete action.

Ironically, the foundation of my coaching work is identifying one’s core values and rooting action in those values – starting with the WHY and moving towards the WHAT. But in this case, it was helpful to take a reverse approach, starting with the WHAT and then moving towards the WHY. Examining my past actions and future desires informed my goals, and I drew my values – and ultimately my personal theme – from that examination.

In fact, I’d say that steps 4 and 5 occurred concurrently in my process. As I was writing down the WHY for my third goal, I realized the same word had appeared in all of my WHY statements thus far. Behind every goal, there was a desire for connection – with my target audience, with my family, with myself.

And there it was. My personal theme for 2017. Connection.

<insert heavens opening and beams of light streaming down>

As I wrote the word connection, something clicked. This was it. And of course this was it! The concept of connection is wholly consistent with my personal core values, and upon reflection, I see how it guides everything I do in my professional and personal spheres. Yet it took a different, backwards-to-me approach to get to that realization.

If the idea of having a personal theme for 2017 resonates with you, it’s not too late. Remember, any day can be your New Year’s day! Don’t be afraid to try a new approach. You may find it opens up doors that were previously closed.

In the spirit of connection, I’d love to hear from you. Did you choose a personal theme for 2017? What was your process? And how is your theme influencing your actions in the new year? Leave a comment below with your thoughts.

If this process feels difficult to you, consider working with me. As a coach, I love helping people clarify their purpose and achieve their goals, and I’d love to work with you.

Here's to a year of connection and purpose. Happy 2017!